This rubble here, used to be a home,
Whispers of what once was, lingers in the ears
Of darkness, where these remains rot,
Memories and dreams, charred beyond thought
And recognition, in a still sleep, smoking
Amidst the forever residents, blended
Into the debris, left in the forgotten,
A sunken ship atop the exploded volcano,
No more life, no more cool breeze
Waking up the house where a family vanished,
Into fragile ash, crushed in the fine breath
Exhaled from their enemy, roosted upon demise
Of what he couldn’t bare to see, the good
Without any overcast, there needed to be chaos,
And in the calming of the after, he struck a match
To the gullet of this well made home
Just to watch it burn and swallow happiness,
All so he could smile watching from Olympus. 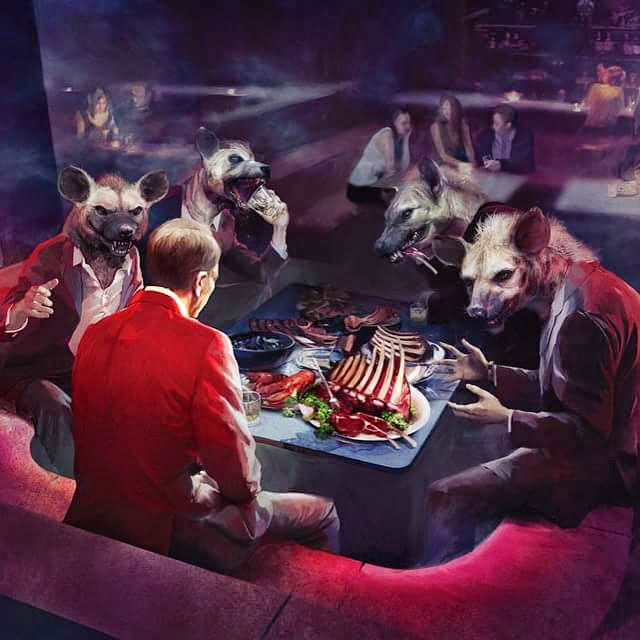 I found myself, in the dwelling of beasts,
Not beaten, or scared of growling shadows
That hunt, for their next ravaging night,
The devil in them, fills innocent hearts
And turns their light black, taken underground,
And lives with their rapists, myself being one,
I revel in the shedding of their curls
As my friends and I pillage the wasteland
Above the limbo they never wake from,
I shroud myself in the muck, yet before
The incident, I was absent from reality,
Stuck in savagery, and I never flinched away,
I stampeded toward it, greedy for my meal,
Now, I fear my unquenchable hunger
Until I saw her, taken by my fellow demons,
About to tear her flesh, and devour her soul,
Her eyes struck me, encompassed in her shutter,
I pulled them off, saving her from becoming
Our feast, but putting myself, on the plate,
I suggest comfort while we dine, some class,
They agreed and we brought her down below,
Locked her away, until we were ready
But I would never be ready, ever again,
I snuck to her pin, tried to converse with her
As she hid away from me, my beastly exterior,
I hardly understood why, was she aware
Beyond the havoc, that I crushed bones
Within my chomp, and left little scraps,
She feared me and my entire pack,
I couldn’t give her in, she stirred alive
Complexities that had never surfaced before,
I begged her to look at me, to capture
Her glimpse at me that set me free,
She did, and dropping a tear into the dust
Reviving in me, what was lost to the blindfold,
We finally talked, expressed fears and guilt,
As I shed my beast, into man,
I needed to save her from the horror
And disgust that was coming for her,
I was ready to sacrifice myself, for her safety
So that she would tell this story to others,
Warning them of the evil that lurked inside
What was a man, tainted by sinners,
We heard footsteps trickling down, as I hid
Waiting in the shadow, then pounced
On a supposed friend, and had an idea,
A meal would be served tonight, but she
Would not be the honorary delight,
She would flee to the surface, and vanish
From ever being seen by these animals,
The stage was set, as I brought over
The silver platter to the salivating demons,
All the while they’re shoveling
What they believed, was innocence in curls,
Was in fact, their fallen turbulent brother,
Suspicions arose, when they noticed
I had not taken a single bite, which caused
Growls and uproars, as my facade faded,
What else to do, but to take as many of them
Down to the fire pits below our cave with me.

As the glass shatteres, at her feet,
The still of the moment
Is clenched between her teeth,
Her eyes, swimming, in the tango of sound
Around her, catching every whispered crash,
Even the hurried flap
From its wing, perched heavily,
Behind light shades, to see what she can,
When she, herself is encapsulated
In a narrow uncertainty,
The grim scene she sees, isn’t registering
Inside her corrupted mind, lost
To the horror in the spotlight
From the knocked over lamp,
A trail of havoc leads to where she’s frozen
At the nightmare she can’t get away from,
Blinking, in reaction to strikes upon
Open flesh, opening deeper in the crimson,
She continues to cling to what stands
Before her, stumbling into her eyes, yet
She begins to wonder,
As her heart drops below the iced surface
When she notices, how far from dream
All that is transpiring, she actually is,
The hand with the thick coating of blood
Keeps lunging down, at an elderly man,
A man she knows, to be her father,
She steps closer, breaking her polar stance,
The hand repeating itself
As the point of the blade is dulling,
No creaking wood as she moves in a bit more
With another fatal stab, to a vanished soul,
Clearing view of who wields death
Changing view, and back into her own self,
It is her, pinning down her father
Feeding him to the devil,
She stops the repetitive knife,
Looks back behind her, and to no avail
She is not disconnected, anymore,
Everything comes flooding back, memories
Of that day, and how she came to this end,
Her father smirking with a bottle in one hand
And a hand full of her hair in the other,
She shivers from the record playing
While he takes away every shed of her,
Too long, she let the slither of his disgust
Enter her domain, her tarnishing cage,
Until she broke free, in a rage
Leaving her feeble, broken self to follow,
Finding herself, unrecognizable.

Subtlety, is shrouded in imperfections,
No passion in it’s blips,
Nothing to revel in
But the short gasps of air,
Suffocating from second, to second,
Gaining nothing, losing moments
That slip through the clips,
Everything said and done, even before
You opened your eyes from blinking,
Missed the opportunity,
Missed that part of the day
When all that matters to you, is lined up
So perfectly, to be washed away anyway,
And on such short notice,
We move through it all, to come out
Empty handed to the stage, laughed at
For not being on time and prepared
On such short notice,
You can’t hang on her word that dripped down
A mere second ago,
She’s on a different subject,
Lost in the conversation, not from intruige
But, from analysis,
She walks out on you
During your perplexing state
On such short notice, to be where you can’t,
You shouldn’t live for the moment, for it
Comes and goes before you notice it.

You wrestle with the shadow
To stay above you,
Afraid of Loneliness finding passage
In through the crack of light
From the fading eclipse,
Trying to pin down the cast night
Over you, pitching yourself out of view,
Wandering further into your veiling
Thinking your scent vanishes along with you,
But the hunters can’t be easily swayed
As you hear, their heavy breathing,
The lock is broken, letting in your villains,
Shining light from their palm, reflected
In your shaking fear-filled eyes,
Disbelieving that they’ve found you, paralyzed
By the hunters nearing their conquest,
Now a different kind of shadow
Rises above you, as the swarm you hid from
Comes rushing through the open door,
Beating you down, wrestling, with you
To succumb to desolation,
So you brave it the best you can
Until the next eclipse. 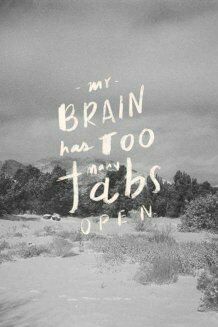 Late at night, as I peruse my thoughts
And jump, from idea to Wonderland
Escaping narrowly into another tab,
Finding myself in a distant picture,
Foreign steps, into a calm river
And out into the cold, with no blanket
Except for the falling sky, as I dart
To an already traveled road, reviewing
What I have learned, it is what I have forgotten,
Too many open sources, without any retention,
As I continue to sift my way out of swallow
And into another trap, flying to the bottom,
What was I thinking about?
Where has my mind drifted to?
A year in the sun, lost on an island
With the company of my own insomnia.

Carry me to the edge, high above
The deep, unsteady grave,
As I peer down into my own Stretch
To find my everlasting, my mark,
Dust, from Below blisters my concentration,
Pulling me closer, before my contentment,
Thrashing winds around me, pushing
You back into the Flock, as I reach
Not to hold on to fleeting breaths,
But the touch of your life,
So that it keeps me company, in the Abyss,
I’m not afraid to vanish,
I’m not afraid of the unsure,
I just rather have a looping thought of you
As I’m taken, into the Depth.

What is that noise,
A ticking, amplified in my mind,
Far from sight is the source
Of such torture and misery,
It won’t let me rest as it blares it’s echo
Like steel scraping iron, to tell me
It’s grievances against me, in such rage
That I run, fearful of it’s poison,
A scorpion dancing, on open nerves,
Feeding it’s pulsating rock further in,
The sound of it’s legs become rapid
And fierce, like the charge of Vikings,
More and more enter the blitzkrieg
Crushing the ground beneath
Their bloody boots, until,
This feeble mind suffocates under the wave
Of fury, unable to withstand it,
Buried under the fall of its walls,
Within the rubble, is the dormant mind
That could not bear the sound
Shattering the castle, from within.

Stricken by the monster, lurking in the open,
Feeding, off the blood left on the plank
From numerous lashes, when it strikes,
For it swings on the strings of your fear,
Everywhere you’d be, you’d hear it’s breath
Clouding your pulse, filling your shallow pool
In which you stammer, not really wanting
To stay above the surface, content in the gutter
Of your room, down the hall, in a labyrinth,
Right where this beast needs you,
With safety vanishing deep into void
The monster broadens it’s shoulders and stretches
It’s reach to pick you from the bunch
When your scream is ripe, licks it’s lips,
Sniffing the polluted dirt for the next troubled seed,
An insatiable hunger, a curse upon the monster
As well as a curse upon the petrified living,
Long before this monster trolled rage filled
And a shadow under the wings of fear,
He was consumed in the solace of his love,
Embracing the moments they shared together
Until, the erosion brought her to the doorstep
Where she will stand before the daunting judge,
Knowing, her fate even before the disease
Would strike, it’s final blow, with her in his arms,
Right outside their own living fairytale,
In the cold blanket, of the saddened sky,
Placing his palm upon the earth, the damned
Hearing his plea to spare her, and take him,
A deal, the devil could not resist,
Using him as a tool of fear and death,
His Grim Reaper.

Are we dead?
Disconnected in our palms, forgetting
To look up at who sits across from us,
Living under the shelled blanket, keeping
The world far away from ourselves,
Trying to capture every moment, while losing
Them all, to the passing ticks of the clock
Tied firmly on our wrists,
Why log in, when we’re so close to living?
Lost in the long press to function,
We hide from sight, while thinking we’re seen.